Free viewers are required for some of the attached documents.
They can be downloaded by clicking on the icons below.

At their meeting on Monday, October 21, 2019, the Appomattox Board of Supervisors honored Ronald C. Spiggle by unanimously adopting a resolution recognizing his contributions to the Appomattox Community.  The text of the resolution is below.  (Photo of Mr. Spiggle and Mr. Carter is courtesy of Megan Lucas) 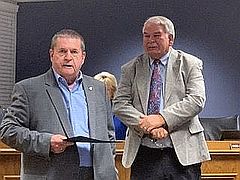 WHEREAS, Ronald C. Spiggle was a respected leader in Central Virginia regional affairs for many years, including representing Appomattox County and/or the Town of Appomattox as a member and officer of the Central Virginia Planning District Commission, the Greater Lynchburg Chamber of Commerce Tourism Advisory Council, the Central Virginia Regional Air Pollution Control Board, the Fair by the James Board of Directors, the Salvation Army Lynchburg Advisory Board, and other regional organizations; and

WHEREAS, Ronald C. Spiggle heavily participated in the activities of the Virginia Municipal League, including serving as the Chairman of the VML Town Section, as a member of both the Nominations and Legislative Committees, and as a member of the VML Task Force under the Attorney General of Virginia charged with studying an_d making recommendations on the Virginia Conflict of Interest Law; and

WHEREAS, Ronald C. Spiggle, in both personal and professional associations, has served his Community through active participation in church and civic organizations promoting community growth and investment, including serving as Chairman of the New Library Fund-Raising Committee, as a member of both the Appomattox County Rescue Squad and Appomattox Volunteer Fire Department Building Fund Committees, in leadership roles with the Appomattox Jaycees and American Legion Post #104, and as a member of the Appomattox County Development Corporation, Appomattox Po.st Office Advisory Board, Appomattox Chapter of Habitat for Humanity, Appomattox Chamber of Commerce Marketing Committee, Appomattox Lions Club, Woodmen of the World #71, Monroe Masonic Lodge #301 A.F. & A.M., and the Order of the Eastern Star Chapter 10; and

WHEREAS, Ronald C. Spiggle, in honor of his achievements, has earned many awards and recognition through the years, including the 1986 Distinguished Citizen Award presented by the Historic Appomattox Railroad Festival Board and the 1989 State Friend of Extension Award presented by the Virginia Extension Council, both which were preceded by his selection for the 1970 edition of the Outstanding Young Men in America.

Adopted by Appomattox County Board of Supervisors, October 21, 2019.

Free viewers are required for some of the attached documents.
They can be downloaded by clicking on the icons below.